Of course, the whole point of having pigs is pork. You can do more delicious things with a pig than just about any other animal. I’ve been following the recipes in “Dry-Curing Pork” by Hector Kent. It’s a nice introduction to making traditional hams and sausages. The first few recipes build on each other, getting slightly more ambitious as you work through the book. Jambons de Camont is a French method for curing a whole ham, but it breaks the ham down into smaller pieces for a quicker and easier cure. 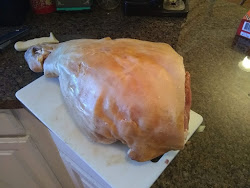 This one starts with a whole, fresh ham. Here is the ham with skin still on it. 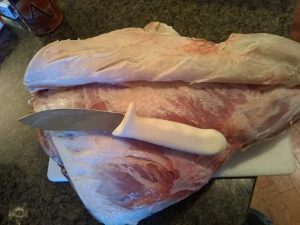 The recipe starts with skinning the ham. This is the ham skinned about halfway. I froze the skin so I can make cracklings some other time. 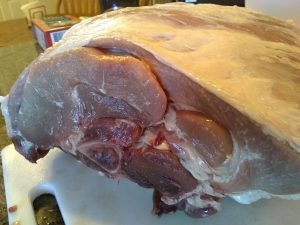 Whole hams take a long time to cure and dry. Jambons de camont uses a shortcut….the leg is broken down into smaller muscles that will cure faster. Looking at the ham from the top, you can see the seams that mark the individual muscles. A boning knife is used to slip between the seams and cut the pieces free. The first cut is below, with part of the muscle pulled up. 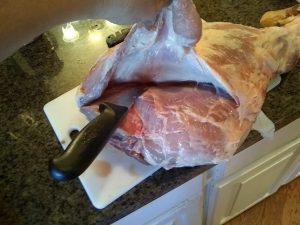 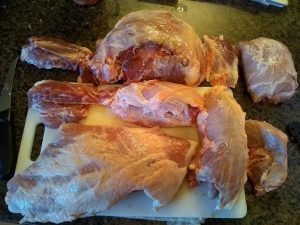 Here is the entire ham broken down. These pieces weigh between two and four pounds. That’s a lot easier to work with than a thirty pound chunk of hog. You can just barely see the white salt crystals sprinkled over them. The salt is 3% of the weight of each piece. There is also a little bit (0.25%) of insta-cure #1 in the mix. These went into the fridge for a few days to absorb the salt and cure. 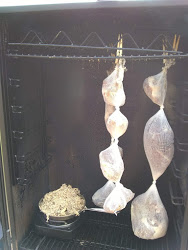 Once the meat had cured, it went into elastic net bags for cold smoking. The net bags are long enough to hold several pieces with knots in between. I have a vertical offset smoker that makes a good cold smoker as well. The pan in the lower left corner is full of oak sawdust. It sits on a hot plate and smolders, but the plate doesn’t get the box too hot. Cold smoking requires the cooker to stay below 90 degrees. That’s not hard to do on cool days.  I don’t think I can manage this in the summer….the black smoker probably gets up around 150 on the inside just from sitting in the Texas sun. I kept the jambons in the smoker to dry as well, sitting over a pan of water for humidity. It’s cool enough that they have dried at a slow, even rate. (Drying with too much heat or too little humidity leads to uneven drying….crusty outside and wet, gummy inside.) 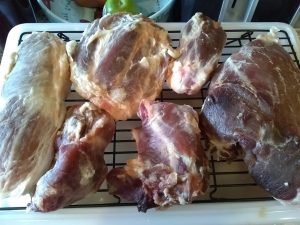 A 30% reduction in weight is the target. The smaller muscles hit the target first, in about two weeks. Here they are, ready to slice. Six weeks in, the biggest piece is still not quite dried down.

Here is the finished product. These are salty, chewy, and slightly smoky. Not bad for a first effort, and a recipe I’ll certainly try again. 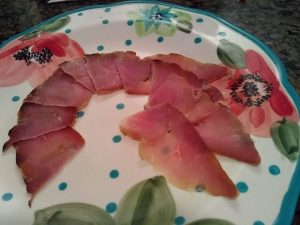